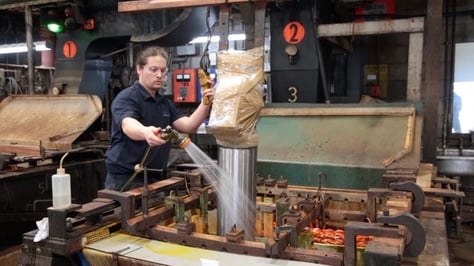 Hard chrome electroplating is a critical part of hydraulic cylinder repair. Cylinder rods that have been in use for a substantial length of time will invariably exhibit some degree of wear on the hard chrome surface, which means replating the chrome is best practice when it comes to returning your cylinders to peak operating effectiveness.

When things do go wrong, it manifests as defects in the hard chrome surface. This generally means the cylinder rod will not perform to requirements. A bad chroming job will invariably cause damage to other hydraulic cylinder components such as seals, which will lead to rapid failure.

With this in mind, here are the 8 common hard chrome plating problems you should avoid when repairing your hydraulic cylinder rod.

There are a number of potential causes for poor chrome appearance, but it is most commonly caused by a mismatch in current density and bath temperature. This condition could also signify the presence of chlorides and tramp metal contamination of the plating tank such as iron and copper.

Poor coverage refers to a plated piece that exhibits “missed spots”. These may be small patches of unplated metal or large sections where the plating has not occurred. The most common cause of partial coverage is bad chemistry. Electrical connectivity issues may also cause this condition - such as poor or intermittent contact between the parts and the rack and/or a rack that cannot carry sufficient current to all areas of the part during plating. This condition is exacerbated during long plating cycles. In all cases, poor or partial coverage is not acceptable for hydraulic cylinder rod repair.

Poor adhesion refers to the peeling, blistering or lifting of the chrome deposits away from the base metal. It is caused by a weak bond between the chrome and the underlying surface. This is generally caused by a poorly prepared surface. During the plating process, chrome is deposited on to the base metal of the cylinder rod, which is (usually) a previously plated part. If this surface is not properly prepared, trace metals, oils and contaminants could be present at the time of plating. Poor adhesion often occurs when chromium is plated over existing chromium, which has failed to be removed during the pre-grinding process. Current interruptions are another cause of poor adhesion.

A rough chrome job is often the result of poor base metal condition. While other finishes such as copper tend to fill in holes and scratches in the base metal resulting in a smooth and level surface, chromium tends to follow the contour of the metal. This means any imperfections will be exaggerated, not levelled off. In addition, these raised areas attract more current, which leads to more chromium deposits in this spot - further exacerbating the problem. The end result is an uneven, rough surface finish.

Pitting is a common problem which is characterised by the presence of excessive small pinholes in the chrome surface. There are many potential causes, which makes it difficult to diagnose and deal with. Sometimes the base metal is porous. Foreign material that is not removed during pre-plating preparation can also cause pitting. Insoluble material suspended in the bath at the time of plating will have the same effect.

Micro-cracking is a normal part of the plating process. As the chromium builds up, it develops fine cracks, which are then covered over by the next layer. Micro-cracking is a somewhat desirable outcome because small cracks provide channels for lubrication, which aids in reducing friction. However, excessive micro-cracking will increase surface roughness beyond acceptable limits. Variations in temperature and chromium sulphate ratio play a role in the degree to which micro-cracking takes place.

The importance of hard chrome quality to every hydraulic cylinder rod repair:

The quality of the hard chrome finish of your hydraulic cylinder rod plays an important part in its performance. While some of these defects are easy to identify, others may require a practiced eye. Some problems may lead to immediate failure of your repaired hydraulic cylinder, while others will reduce its lifespan and make it more susceptible to corrosion. With such a technical process and with so many possibilities for things to go wrong, it’s important that you choose a reputable hard chroming facility to enjoy the confidence of a high-quality repair.