Why hydraulic fluid viscosity is so important.

Viscosity is the measure of a fluid’s resistance to flow. It is commonly thought of as thickness, or resistance to pouring. Choosing a hydraulic fluid with the right viscosity is important to the overall efficiency of the hydraulic system.

Hydraulic fluid viscosity influences important performance parameters including power transmission, lubrication and heat dissipation. Low viscosity increases the risk of internal leakages and negatively affects the efficiency of pumps and motors. High viscosity can cause problems such as sluggish movement, increased mechanical friction, heat generation and cavitation. However, viscosity is also influenced by temperature and system design, which adds complexity to an already complicated story.

In this article, we’ll discuss the ways in which hydraulic fluid viscosity affects your system and explain why it’s important to follow manufacturer’s specifications and select the right hydraulic oil. 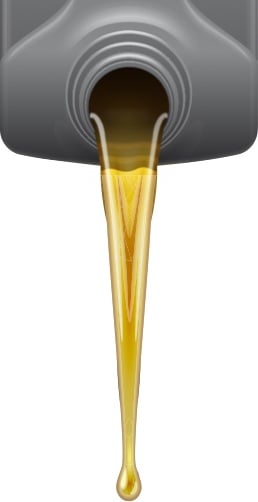 Volumetric efficiency refers to how much power is lost due to internal leakage (ie: fluid slipping between internal parts like vanes and pistons). If viscosity is too low and the fluid is “thinner, it is easier for it to flow through these small gaps between moving parts, which means more energy is lost. Thus, volumetric efficiency is lower and the system becomes less responsive. It also increases heat, wear and contributes to shorter component life.

Hydrodynamic lubrication is also called “fluid film” and refers to the ability for hydraulic fluid to lubricate moving parts by creating a thin film of oil between two surfaces so they do not come into contact with one another. It is similar to the phenomenon of a car aquaplaning on a wet road surface. The viscosity of the lubricant needs to be finely balanced here. Low viscosity results in a thinner hydrodynamic film, which increases the odds of surfaces coming into contact. Higher viscosity creates a thicker hydrodynamic film, but also increases friction. Increased friction generates heat, which lowers viscosity.

Cavitation occurs when the supply of oil is not sufficient for the speed of the system, which results in a low pressure situation. Cavities form in the oil, which rapidly implode leading to metal erosion, loss of lubrication, heat and wear. The higher the viscosity of the oil, the thicker it is, which means it is slower to pump. This makes thicker oil more prone to cavitation.

A key role of hydraulic fluid is heat transfer. Heat is generated by hydraulic fluid moving through the system and performing work. However, it is also responsible for transporting heat away from critical components so pumps and actuators do now overheat. However, since fluid loses viscosity as it heats this means it’s viscosity index must be high enough to absorb as much heat as necessary without giving up too much viscosity and losing its other important properties when it reaches operating temperature.

Air release is the ability of the hydraulic fluid to release enclosed air. This is important because trapped air causes poor system efficiency and cavitation. Fluid with a higher viscosity will release air slower than thinner oils - similar to the way that air bubbles can remain trapped in honey, but will escape rapidly from water. To overcome this, system designers use reservoirs of different sizes to allow the air more time to escape, especially where high viscosity oils are required.

This refers to the hydraulic fluid’s ability to pass through a filter to remove particles of debris and other contaminants. A filter element acts as a restriction when fluid is flowing through it. Filter manufacturers use a parameter known as “Pressure drop” to measure how much pressure is required to push a fluid through a filter. The restriction to flow results in a higher pressure before the element, and a lower pressure after the element (a pressure drop). Higher viscosity oils are harder to filter and therefore cause a higher pressure drop.

Why hydraulic fluid viscosity is so important: