Hydraulic pump noise problems. Should you be worried?

Excessive or erratic hydraulic pump noise is a symptom of malfunction that could cause damage or accelerated wear if not addressed quickly and correctly. While it’s never nice to hear strange noises emitted from your pump, different forms of noise, which are related to different faults can provide valuable clues that can help you to diagnose your problem and get it fixed before it turns into something major.

So it pays to know what different pump noises mean and with practice you can quickly distinguish between the normal operating sounds and signs that something is wrong. In this article, we’ll talk about what causes some of these sounds, so you can identify them. 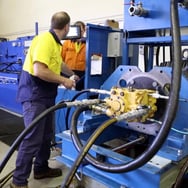 Cavitation is a common pump problem that is characterised by a high pitched whining sound or, in extreme conditions, a severe rattling sound.  This sound is caused by a condition in which a drop in fluid pressure causes cavities to form in the fluid, which rapidly implode (hundreds or thousands of times every minute). As you might expect, this produces a lot of noise. This is an extremely destructive condition that leads to metal erosion and damage to pump internal surfaces. Causes of cavitation include fluid line blockages, blocked fluid filters, overly high oil viscosity and excessive pump rotation speed. 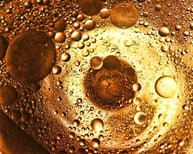 Aeration is different to cavitation. Whereas cavitation is the formation of cavities in the fluid, aeration is the introduction of air bubbles into the fluid - usually caused by things like  leaky couplings or negative pressure situations that draw air under hydraulic seals and such. The whining noise caused by air leaks is similar to cavitation, but is more erratic in nature due to the uneven distribution of the air in the hydraulic system. In addition to noise problems, aerated oil also leads to other issues such as sluggish performance, reduced lubrication and increased wear, damage to seals and increased contamination. So it’s important that you do not ignore an oil aeration problem. 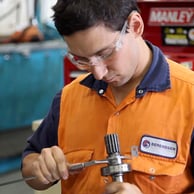 Metallic noises are usually a sign of some kind of mechanical issue. This could include grinding sounds, whirring or roaring sounds, rattling or general noisy operation. Especially when accompanied by excessive vibration, temperature increases or declining efficiency. Mechanical pump issues can be caused by misaligned couplings, which places pressure on shafts and bearings. Any  grinding, scraping, rough running is an indication of serious internal wear. In such cases, the pump must be disassembled, inspected and overhauled by a trained technician. Worn components must be replaced and in some cases machining  work must be performed to restore the pump surfaces.

Hissing sounds are usually related to your hydraulic pump relief valve. Its job is to open if pressure reaches a certain prescribed limit, but it is not designed to remain open and dump pressure continually. So this sound is definitely not normal and needs to be addressed.

A constant hissing sound is indicative of a relief valve that is set too low or is stuck open and is continually releasing pressure. An erratic whistling sound is a symptom that a relief valve is set incorrectly or is damaged. It is common for pump settings to be changed carelessly or inadvertently - sometimes to overcome other issues with the hydraulic system - sometimes due to a lack of understanding of the correct operating conditions, so include this in your regular checks. In addition to noise problems, relief valve damage can be accompanied by slamming of actuators, stalls and excessive heat generation.

Noise issues are just one symptom that gives you a clue when things go wrong with your hydraulic pump. There are several other issues to know and understand, which could help you to identify pump problems quicker. Which means you can sort them out sooner - potentially saving big money down the road. These include heat problems, pressure problems and flow problems.

To help, we’ve created a downloadable troubleshooting guide containing more information about each of these issues. So that you can keep your system up and running and avoid unplanned downtime. Download it here.