Whether you’re ordering a custom-designed hydraulic cylinder or repairing a worn one, you may be confronted by a range of mysterious, technical-sounding words. This is a complicated subject matter that is made more confusing if you do not understand these strange new terms. To help, we’ve decoded some commonly-used hydraulic cylinder terminology with this glossary, written in words that everyone can understand. 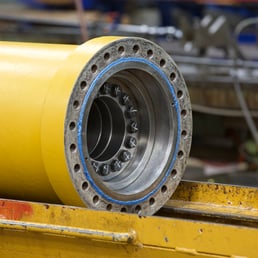 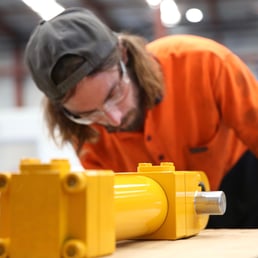 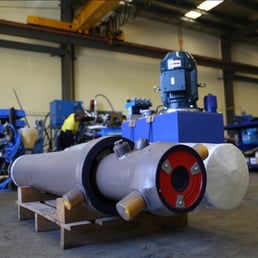 Actuator is a commonly used alternative term for hydraulic cylinder. An actuator is a mechanical device that converts fluid energy into motion.

Aeration refers to the presence of dispersed air bubbles in the hydraulic fluid of a system. Aeration can cause erosion of pump components.

The barrel is the outer tube of the hydraulic cylinder. It’s function is to house the piston and contain the cylinder pressure.

The interior diameter of the barrel.

A severe condition characterised by the formation of pockets of vaporised fluid within the pump. When these implode they cause hydraulic fluid degradation and erosion of pump components.

A U-shaped joint that fastens the hydraulic cylinder to a mounting point by means of a bolt or pin passing through the ends of the connector.

This refers to the quality of uniform ‘roundness’ of the cylinder bore, and the absence of distortion or ovalling of the cylinder barrel, which would lead to obstruction, friction and wear.

The presence of particles, debris, sludge, water or other destructive materials in hydraulic fluid.

Damage caused to metallic components due to oxidation, chemical attack or other corrosive agents.

The full range of motion of a cylinder from fully retracted to fully extended and back.

The number of times a cylinder is required to extend and retract within a given time frame while in operation.

The unintentional movement of a cylinder due to internal leakage of hydraulic fluid.

A type of hydraulic cylinder that features two opposing piston surfaces that push in opposite directions.

Double rod cylinders have a rod attached to both sides of the piston. This allows simultaneous movement of two loads on either ends of the cylinder.

A type of seal found between two reciprocating parts in a hydraulic system such as the cylinder rod and gland. This type of seal must be both strong, flexible and have a low coefficient of friction to facilitate movement.

A type of rubbery material used in the manufacture of hydraulic cylinder seals. Elastomers have desirable properties of strength, flexibility and low coefficients of friction.

Damage caused to internal cylinder components such as pistons and seals due to harsh internal forces such as friction, abrasion and cavitation.

The failure of a hydraulic seal occurring when the seal material is overcome by internal pressure and begins to push outward.

The weakening of cylinder components due to repeated stresses. Fatigue can occur either during the course of normal operation, or as a result of improper operation or inadequate hydraulic cylinder design.

Hydraulic fluid is a liquid media used to transmit force in a hydraulic system. It is an incompressible oil with special properties of lubrication and corrosion-resistance.

A term referring to the resistance of flow of fluid. Fluid friction results in increased fluid temperature and decreased efficiency.

A method of mounting the cylinder off the head comprising a flat plate through which the cylinder rod is passed and secured.

Hardness refers to a component material’s capacity to resist wear. Components such as hydraulic seals are given a Durometer rating that indicates the seal material’s hardness.

The process of conditioning the interior surface of the cylinder wall to assist with lubrication during operation.

The erratic movement of a hydraulic cylinder during operation - usually caused by internal friction or damage.

Another term for hydraulic cylinder which is a mechanical device that converts force into movement in a single (linear direction).

Mud cracking is a hard chrome plating defect which is sometimes found on hydraulic cylinder rods. It is characterised by a cracked appearance - similar to dried mud.

The point at which the cylinder attaches to the machine or device that it must push against during operation. Different mounts are designed for different ranges of motions.

A common rubberlike material used in hydraulic cylinder seals and o-rings. Its properties of flexibility, heat resistance, abrasion resistance and strength make it suitable for a wide range of applications.

The maximum expected pressure experienced by a hydraulic cylinder during normal operation.

A type of circular seal made from rubber or other synthetic material.

Oxidation is the breakdown of hydraulic fluid through exposure to heat or oxygen - usually caused by a worn hydraulic cylinder that is no longer sealing correctly.

Particle count is a way of measuring hydraulic fluid contamination. Contamination is the presence of small particles of debris or tiny fragments from eroded cylinder components. These particles can be detected and accurately counted by sophisticated instruments.

Pressure is the force imparted by hydraulic fluid upon the surfaces with which it has contact. Liquids are incompressible, and as such, when a load acts upon it, the force is immediately transmitted to the contact surface.

A tight-fitting flat disk which seals against the hydraulic cylinder walls - hydraulic fluid pushes against the piston which causes it to slide within the tube - thereby converting force into movement.

A type of seal material used in certain applications.

An opening in the hydraulic cylinder allowing fluid to flow in and out.

The back and forth movement of cylinder components as the cylinder extends and retracts through its full stroke.

A high strength steel shaft that fits tightly into the hydraulic cylinder and connects to the piston. It slides in and out of the cylinder during operation and this part is usually hard chrome plated to provide it with the necessary low friction properties and wear resistance.

A rod eye is a type of mounting connection attached to the end of the cylinder rod. This connects to a mounting point on the machine or device to which it is attached and often incorporates a bearing to allow for some movement - depending on design.

Also commonly known as a cylinder head, the gland is located at the mouth of the barrel and secures the rod as it extends out of the barrel.

A hydraulic seal is a relatively soft, non-metallic ring that fits between reciprocating parts of a hydraulic cylinder such as cylinder barrels and rods. The seal’s main function is to contain fluid within the cylinder and to allow it to develop sufficient internal pressure.

Also known as lateral-loading, side loading refers to the occurance of increased forces lateral to the centre-line of motion. This type of force causes increased wear unless it is compensated for by design.

A term used to describe internal leakage of hydraulic fluid within a cylinder.

A non-reciprocating type of seal (also known as a buffer seal) within a hydraulic cylinder. This type of seal is often tasked with maintaining cylinder pressure and is usually made of harder material than other seal types.

The complete range of extension of a hydraulic cylinder rod.

Also known as side-loading, lateral loading occurs when a hydraulic cylinder encounters unintended force perpendicular to its motion during operation.

A type of hydraulic cylinder that pushes from one direction only.

An arrangement of two connected hydraulic cylinders which work together to perform the required function.

A type of multi-stage hydraulic cylinder with sections that extend in a telescoping series. This type of cylinder can have two, three, four, five or even six stages.

A method of fixing a cylinder to a machine with threaded metal rods that are passed through drilled holes at either end of the cylinder and ‘tied’ into the other surface with securing bolts.

A simple method of cylinder mounting using steel lugs welded to the sides of the cylinder.

The point at which the pressure of hydraulic fluid becomes low enough to cause it to convert from liquid to gas. At this point the fluid forms a vapour bubble, which implodes upon recompression.

The rate of flow of hydraulic fluid.

A term which describes the consistency or ‘thickness’ of hydraulic fluid.

A light-duty seal located on the external side of the cylinder head to wipe away grit and debris and prevent them from working their way under the pressure seals and causing damage or internal contamination.