Particle contamination refers to the presence of microscopic debris such as dirt ingested from the exterior or very small metal particles that break free from the interior parts due to friction during normal operation. Under a microscope, these particles exhibit sharp edges and spines waiting to terrorise your equipment. Over time, these particles build up and make their way under seals and between running surfaces to grind away and lead to machine failure if not addressed. 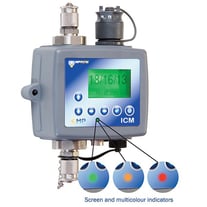 As discussed in previous articles, hydraulic filters are your best form of defence against hydraulic fluid contamination, but without some way of monitoring the fluid, it’s often hard to know whether your filters are doing their job. In addition, a rapid rise in particle contamination could be a signal that something is not right with the system. So, it’s handy to have a way to monitor fluid particle contamination levels continuously, in order to take action before it’s too late.

The hydraulic fluid contamination particle counter is a device which does just that. These sophisticated instruments are capable of determining the quality of the liquid passing through them. There are various types. Some remain installed on fixed equipment, others are available as portable units that can be transported to a site and used to monitor machines such as bulldozers and excavators to determine fluid cleanliness. Unlike other methods of fluid analysis such as microscopy, they are more accurate and less time-consuming.

So how do these ingenious devices perform this task? There are three ways in which particle counters work. These are light scattering, light obscuration, and direct imaging. In all three techniques, light is shone through the fluid as it passes through a detection chamber, with different approaches to the way in which the fluid is analysed.

In the light scattering technique, a highly focussed beam of light (such as a laser) is passed through the detection chamber. Any particles within the chamber will cause the light to deflect in a “scattering effect” which increases light intensity. This is picked up by a very sensitive sensor on the other side of the chamber, which detects the increase and converts it to data regarding the level of contamination.

The light obscuration method is the reverse of the light scattering approach. In this case, an LED light is passed through the chamber and a diode measures how much light is lost or “obscured” by the particulates in the fluid. When a particle passes through the beam it reduces the amount of light received by the diode, and from this change in condition, the size of the particles can be deduced and the level of contamination ascertained to an accurate degree.

Direct imaging particle counting employs the use of a high-resolution camera to detect particles. Quite literally, this type of particle counter takes pictures of the particles within the fluid and sends them to a computer to be analyzed by specialised software. This software is able to provide much more detailed data on particle size, colour and shape, which can be stored and referenced over time. The downside to this approach is that is only practical for relatively slow flow rates.

Keep an eye on your fluid with the automatic particle counter.

Compared to other methods of fluid analysis, the automatic particle counter is fast and accurate. Other techniques such as like microscopy, are time-consuming and sometimes much less accurate.

For more information or advice, feel free to contact our sales support and we will be happy to assist you.